Information given on this page is based on tests made with the 370mm x 292mm aperture OmegaCAM shutter and the 480mm x 480mm aperture PS1 shutter for the Pan-STARRS prototype telescope.

As the opening and closing shutter blades can be moved completely independent the shortest exposure time is basically given by the time resolution with which the system can respond to the shutter open/close signals. This depends first of all from the turn around time of the firmware polling loop which detects these signals (40µsec). But in practice exposure times below 1msec don't make sense as the non-homogeneities are typcally of the order 300 - 500µsec. Therefore the shortes possible exposure pulse is electronically limited to 300µsec.

The exposure duration accuracy has two aspects which are considered independently:

Non uniform exposures occur, if the movements of both shutter blades are not exactly identical. Limitations are mainly due to the stepper motor resolution and the tolerances of the mechanics since the velocity profiles for both blades and for both movement direction are the same within 1µsec and independent of the exposure time. Irregularities in the blade movement will therefore add/subtract a certain amount of time at the position in the aperture were they occur. Their effect on exposures then increases linearly with decreasing exposure time (and they are best detected at very short exposure times).

Based on these considerations the exposure homogeneity was measured by adopting a procedure commonly used at telescopes: Flat field exposures taken with the exposure time in question are compared with exposures with significantly longer (50 x) exposure times which serve as reference. Since no huge camera and no adequate optical setup was affordable to get real flat fields the setup was slightly modified.

A homogeneity test stand was designed which allows to take direct images of the shutter aperture. One important difference between this setup and the telescope configuration is that we get sharp images of the aperture plane. In contrast each pixel of the telescope focal plane receives light through a cone which, at the postion of the shutter, has a finite diameter which depends on the effective aperture ratio and the distance from the focal plane. Corresponding small scale effects will be smoothed out at the real telescope while in our setup they are well imaged. This makes our setup more sensitive to non-homogeneities.

A test stand was designed such that the shutter could be operated in vertical orientation. With respect to homogeneity the vertical orientation is the most demanding one: While the blades move up and down there is maximum load on the motors and maximum load difference between upward and downward motion. The test stand allows to take the images of the shutter aperture plane with a cryogenic CCD camera. The aperture is illuminated by a lightbox. 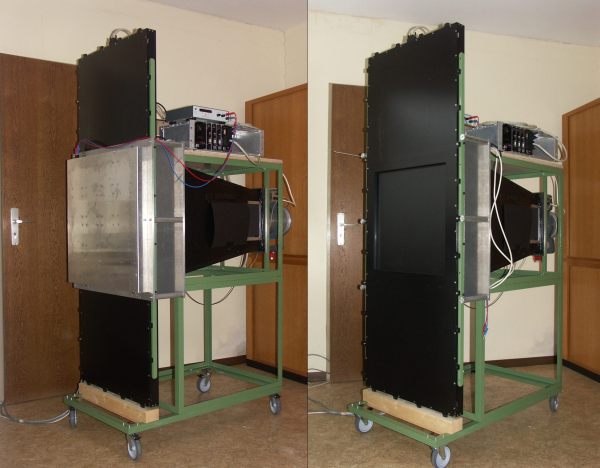 The images show the test stand for the PS1 shutter with and without a lightbox. The camera is a 2k x 2k, 15miron CCD systems equipped with a SLR zoom lens and a Prontor 60mm shutter. The camera lens is focussed onto the plane of the shutter aperture. The detector was LN cooled to -95C.

Several short exposure images were taken and coadded to improve S/N. After subtraction of the bias level long and corresponding short exposures were divided by each other and the result normalized to an average of 1. All columns across the aperture (running parallel to the shutter blade movement direction) were averaged to further improve S/N. The resulting scans are shown below.

We have choosen an exposure time of 0.2sec to demonstrate the exposure homogeneity and quantify its limits. Reference exposures were 10sec long (i.e. a factor of 50).

OmegaCAM shutter exposure homogeneity at 0.2 sec exposure time was measured at two temperatures. A number of short exposures were coadded to improve S/N (left: 32, right:64) The abscissa covers the complete width of the shutter aperture (370mm). The diagrams show that the nonhomogeneities are well within +-0.3%. Residual curvatures in the scans are well explained by a shadowing effect which occurs only with our setup but will not exist at the real instrument.

By adding up a large number of short exposures only systematic non-homogeneities can be detected. Randomly occuring effects are smoothed out. They will be discussed below.

The shutter operates in either direction. The results presented so far show the average effect of both movements. Differences between the two directions are not expected since the shutter design is highly symmetric. But all tests presented here were made with the shutter in vertical position - with maximum load difference for opposite movement directions. If this has led to differences they should be easily made visible by direct comparison. To do this frames were separated according to the upward/downward direction and homogeneity diagrams were calculated using frames taken with one movement direction as reference for those taken with the opposite direction.

Ratio of flats taken with opposite shutter blade motions at 0.2sec exposure time and two temperatures.

By ratioing images averaged over many exposures, one can in principle only detect systematic inhomogeneities, but not random ones. Random occurences of exposure inhomogeneities have not been searched for in a systematic manner over a large number of exposure operations. But there is little reason to suspect that random inhomogeneities would occur at a level that exceeds the systematic ones significantly - keeping in mind the shutter design and its principle of operaton:

The most probable source of significant random deviations of the blade motion from the velocity profile would be missing stepper motor steps (e.g. due to obstacles or exceedingly high friction). This is checked after each blade movement by reading the corresponding encoder value. Deviations corresponding to timing errors of >0.4msec would have led to an error signal.

Non-homogeneities are due to timing irregularities of the blade motions. At very short exposure times (few msec), where the blades form a narrow slit, non-homogeneites of the same order would lead to collisions of the two blades. These collision should be visible and audible. But down to exposure times of 1msec collisions were not detected (heard).