"We received the shutter today. It looks excellent as usual. Another triumph of German engineering."

"We have mounted the shutter to its ODI interface. We also run the shutter yesterday evening, andit worked fine. This is very nice work!!!!"

"We received the shutter today. It works great. Another triumph of German engineering. Can't wait to see it on the telescope. Thanks very much for your efforts."

"Many thanks for great collaboration. I believe that the shutter will be a great point of our new system.
The new cover picture is really great!!! It shows exactly how we plan to use the new shutter !!!! Many many thanks once again!"

"Did I not email you to say how nice the shutters look?
... ...
The shutters, the packing and everything are VERY nice. What a lovely job. Thanks to you and your team."

"Boy, that was fast. We received the shutter today. It looks good.
... ...
We have operated the shutter and everything looks fine. Great work."

"Update on the shutter, Jeff. Sidik started going through their manual and trying out the software modes and communcations. He was *very* impressed. It appears to be exceedingly well done (including warning LEDs and flags which come on if certain screws aren't in tightly!) and extremely flexible. I suspect that it will be a joy to work with and cause no end of satisfaction." 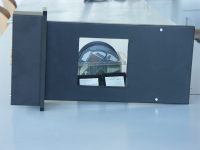 "We have been running your shutter. It is great. Magnificent German engineering. "

"... Given these uncertainties, there was _no_ difference in any of the times for any integration times, any blade, and any direction. The shutter looks great."

"The shutter itself, (which in the meantime we operated with PULPO I) is truly impressive, as are your test results."

After having spent many hours looking at the shutter opening and closing and listening to his nice "voice", I have to say that I am very satisfied with it. Thank you very much for the shutter and for having let me spend so much time at the instrument for testing.

"I have used the 90Prime shutter on 3 engineering runs and have had no problems. ... It works great. We had a great time one day lying on our backs looking at the shutter through the Cass hole in the telescope (up at prime focus) and changing integration times to see the slit move back in different widths. That's entertainment!" 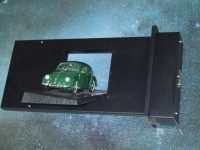